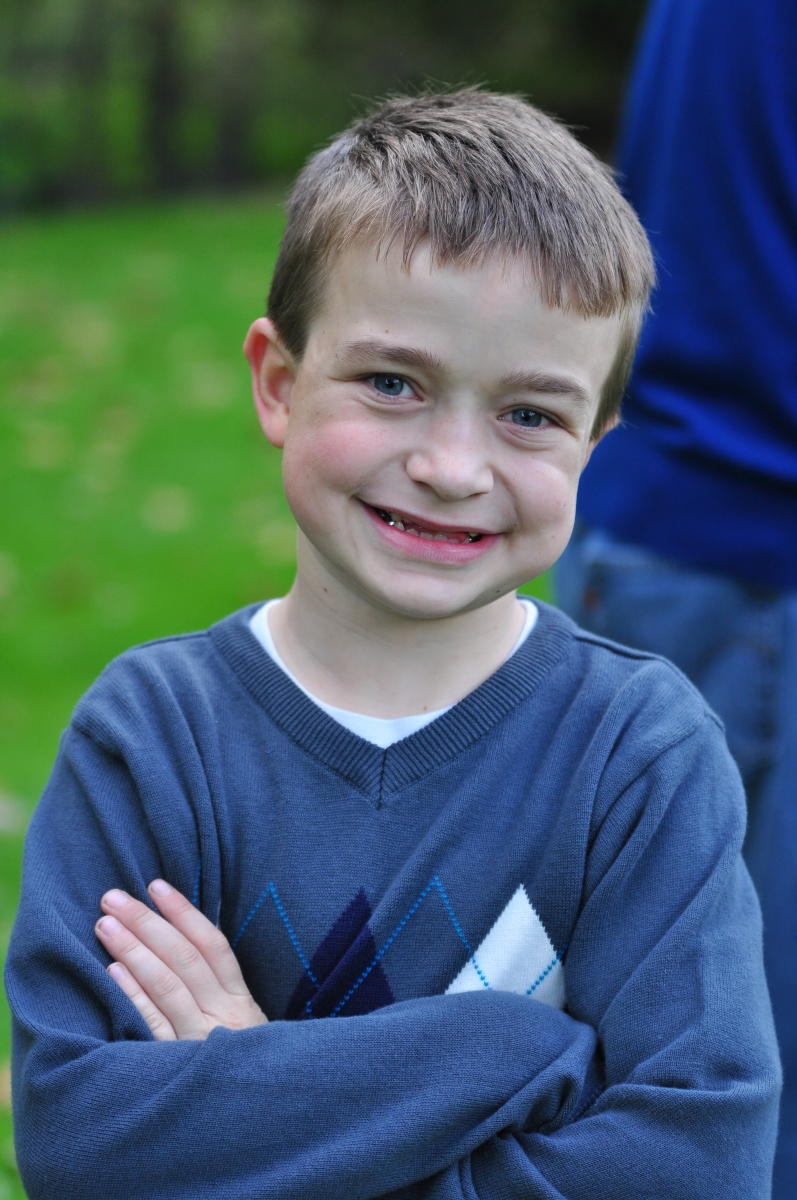 The story of Andrew Padfield is about fighting against the odds. A story of determination, hope, and love in the face of adversity. Andrew was diagnosed with a rare and aggressive brain tumor in his cerebellum at 17 months old. Before the tumor, he was developing within normal limits and his mother, Michelle Kees, Ph.D., had no specific concerns, being a psychologist with a focus on child psychology.

“He said his first words on target and had tremendous receptive vocabulary. Everything was normal,” Kees stated.

However, after Andrew began displaying prolonged bouts of vomiting and difficulties with his motor skills, his doctors ran a CT scan and found a mass inside Andrew’s brain. Immediately, they began rigorous treatment that included chemotherapy for fourteen cycles. During his periods off of chemotherapy, Andrew would exhibit a fever and become ill, leading him and his family to spend more time in the hospital. “It was truly rotten. We lived in the hospital. He was sick all of the time. So we focused on how we can give him the highest quality of life possible,” Kees explained.

Despite treatment, doctors gave Andrew’s parents a morbid assessment of his likelihood of beating the cancer and surviving. “We were told that 90% of the children with Andrew’s cancer die. We were given zero hope.” Andrew’s parents were told to consider funeral options as he was not expected to survive. Not allowing themselves to be deterred by pessimism, Kees and her husband then sought the safest and most effective treatment for Andrew. He was enrolled in a specialized proton radiation treatment in Indiana, a treatment that is less likely to harm healthy tissue, unlike standard radiation treatment.

Hope in the PACT program

“After fourteen months in and out of the hospital, Andrew’s world was very different. As he progressed in his treatment I noticed that he began slipping off of the developmental curve, specifically speech and language. I was advised by a friend to call Judy Nantau at the UCLL to discuss the PACT program.” Kees felt divided on whether or not to enroll Andrew in the PACT program as it posed a risk. “Andrew’s immune system was destroyed by the chemotherapy and by enrolling him in the program around other children, there was a risk of him getting sick.”

Senior speech-language pathologist, Judy Nantau, counseled with Kees and helped instill a positive-thinking approach to Andrew’s situation. “I remember vividly, she told me I have to live as though Andrew is going to live.” And so she did. Kees and her husband had to renegotiate Andrew’s chemotherapy schedule in order to provide time for his speech-language therapy. “He needed speech therapy if he was going to live, but he also needed to receive chemotherapy for a chance at surviving. By choosing PACT we were also choosing hope. We were choosing that this little boy was going to live.”

The results from Andrew’s six-week enrollment in the PACT program were astonishing! “Had I not seen the pre-assessment evaluation, I would have thought Andrew’s improvement scores were a hoax. He jumped 30 scale points! I have never seen that kind of positive response to an intervention in my line of work before. What was even more amazing is that his results were maintained.” Kees had Andrew tested through the University of Michigan two months later and his neuro-psychological testing results placed him in average and above average scores in all subjects.

“Before PACT, Andrew was not talking, only using single-word expressions. He came out of the PACT program talking!” Kees shared her satisfaction with several aspects of the PACT program, “Judy was just exceptional, the group support we found at PACT was unique and exactly what we needed that you wouldn’t find anywhere else, and it gave Andrew the tools and skills he needed to move on with his life.”

Andrew is now seven and a half years old and enrolled in the second grade. “He can read, write, do math, he loves science. He is just amazing now. If you were to meet Andrew you would never be able to guess what he has been through. Andrew now has twin brothers and adores them as much as Star Wars, music, and writing books. Andrew has a genetic mutation and is a high risk for relapse and recurrence of the cancer. He continues to have brain and spine MRIs every four to five months for monitoring. “Only a handful of kids nationwide have not relapsed. We live with that in the back of our minds but we also live our days in the front of our minds with Andrew. He knows and we are transparent with him about everything. We feel it is our job as parents to give him those memories of his experience. He knows he went to PACT.” Despite his past with a cerebellum tumor that typically prohibits motor functions, Andrew learned how to ride a bike this summer. “We are so lucky to be his parents.”