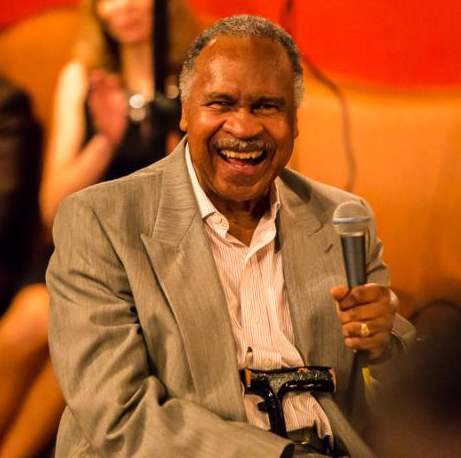 The Jazz Tribute to Louis Smith on June 14 not only built awareness of aphasia and paid homage to one of our own local jazz greats, but also gave Smith another night of performing for a crowd.

The trumpet is said to be one of those instruments that you can learn to play in an hour, but it takes a lifetime to master. Before he had a stroke, Louis Smith had indeed reached mastery. Smith was a jazz professor at the University of Michigan and world-renowned jazz trumpeter, producing 14 albums and playing alongside music legends like Miles Davis, Count Basie and Thad Jones. Smith’s talent was seemingly lost when he had a stroke in 2005 and experienced aphasia and partial paralysis.

Aphasia is a speech and language disorder that affects those who’ve had a stroke (or other type of brain injury), causing them to lose the ability to speak, comprehend language, read and/or write. Smith was inexpressive after the stroke and his wife, Lulu, was advised to place Louis in a long-term care facility. However, she refused to give up on Louis’ possible recovery and turned to the University of Michigan Aphasia Program (UMAP) for speech and language therapy.

UMAP reunited Smith with his talent — and his ability to communicate.

“He lit up when music was involved,” said Gordon Krainen, speech-language pathologist at UMAP. Unable to use his right hand after the stroke, Smith relearned to play the trumpet with his left. He also began to sing, something he didn’t do as a performer before the stroke.

On June 14, 2015, UMAP hosted the Jazz Tribute to Louis Smith at Babs’ Underground Lounge in Ann Arbor. The event featured the Paul Keller Ensemble, several speakers, and a tribute to the Smiths. The event was a success, with more than 100 people in attendance. Carol Persad, director of the University Center for Language and Literacy which houses UMAP, opened up the day by explaining what aphasia is and who it affects. Former UMAP client Chris and a former UMAP client caregiver, Nicki, spoke about life with aphasia. They both underscored that life with aphasia is very challenging, but can still be deeply rewarding. For the first half of the event, the Paul Keller Ensemble played jazz standards.

Halfway through the program, the music paused for a proclamation: Paul Keller read a special decree from the Mayor of the City of Ann Arbor declaring June 14 as Louis Smith Day in recognition to his contributions to the fabric of the community — as well as his tenacity in fighting his way back from his stroke. Guest speakers, including former colleagues and students, shared stories about Smith’s strength and love of music.

It was then that Smith took the stage with UMAP music therapist Lynn Chenoweth. She described the phenomenon that although Smith can’t speak, he can sing. She explained that music accesses a different part of the brain than language. Chenoweth, Krainen and Smith launched into a rendition of Georgia on My Mind, with Smith taking the lead. It was followed up by a rendition of Amazing Grace, Smith’s singular voice ringing out over the crowd, until everyone joined in the moving moment, tearing up and singing along.

Paul Keller, the band leader and a long-time colleague of Smith’s, said he was not surprised that music could have such a hold on a person. “The language of music is so strong and has obviously left its indelible mark on Louis’s mind and soul,” he said. It was when Keller and the band started playing Smith’s composition of Ande that really ignited Smith’s talent as a performer. He bebopped along to the music with an incredible melodic nuance, playing the trumpet part using only his voice.

“It was six choruses of official bebop language — each chorus better than the last — just like the old Lou Smith,” Keller said. “He was communicating in real time, quick time, with the other musicians. Ideas and jazz vocabulary were flying everywhere and the musical conversation was meaningful and profound.”

The tribute opened the hearts of the audience and raised thousands of dollars for the program through ticket sales and private and corporate donations. Because of the success, UMAP is planning to host an annual Aphasia Awareness event during each June to align with National Aphasia Awareness month.