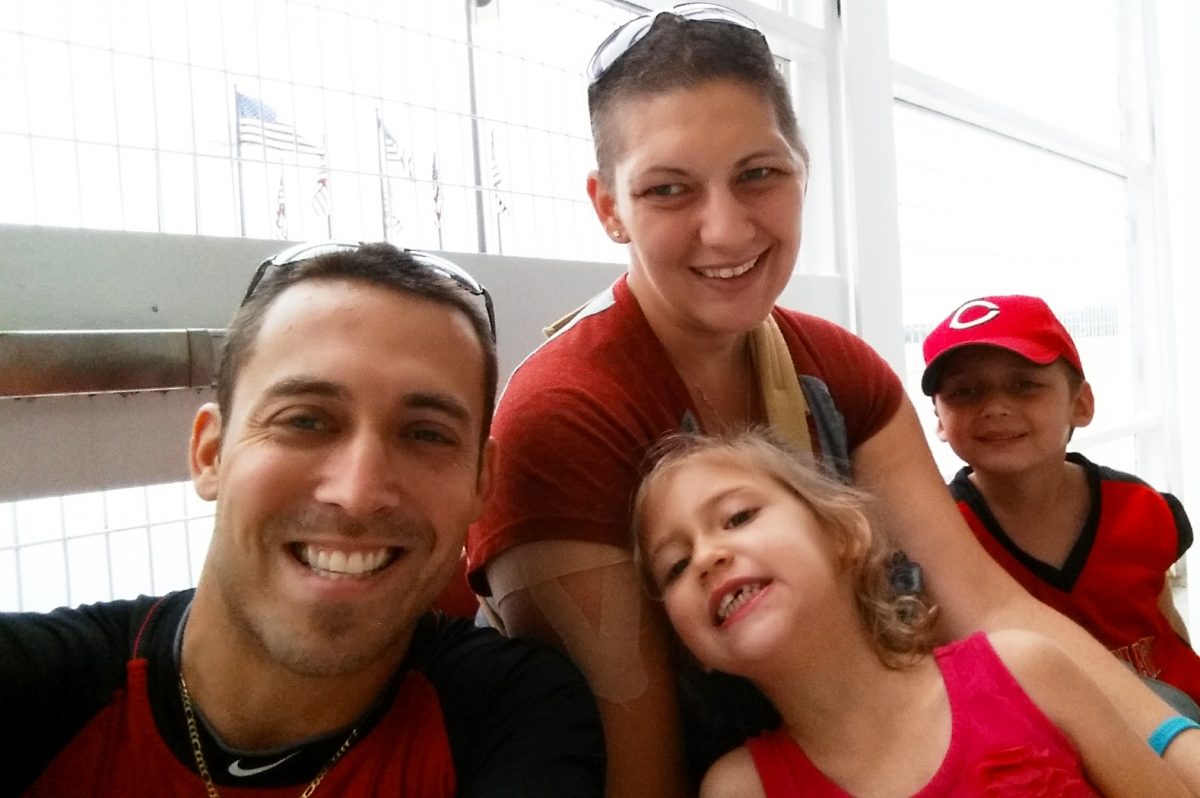 Jessica Rostron thought her migraine was just like those she had become accustomed to over the years — painful, but nothing to worry about. She went to rest in a dark room and when she came out, she faced a new reality. It was more than a migraine. She had experienced a spontaneous carotid arterial dissection, which lead to an ischemic stroke. She was taken to the hospital, where part of her skull was temporarily removed to reduce the pressure on her swollen brain.

The 31-year-old teacher, wife and mother of two young children had lost motor control of certain parts of her body and her ability to speak (known as aphasia). She was in the intensive care unit for five days and spent another seven weeks in the hospital for inpatient rehabilitation.

After another six months of physical rehabilitation, Jessica could move around well, but her aphasia persisted. She was receiving four to five hours of language therapy a week.

“It wasn’t enough,” said her husband Shaun Rostron. “We made the decision to pursue intensive speech therapy because Jessica could handle having physical limitations, but she couldn’t handle not being able to communicate with our kids.”

Shaun began researching intensive programs around the country. He particularly targeted the Midwest so they could drive home to Cincinnati on weekends to see their children, who were staying with family.

“I sought out the best speech therapy program I could find, and it was here at UMAP,” he said. “The fact that UMAP had been in business for more than 65 years, and that it seemed like a top notch program, helped us make the decision.”

Since coming to UMAP, Jessica and Shaun said they both have noticed improvements in her language abilities.

“Confidence is the biggest thing,” said Jessica. “Talking, building words, and understanding too.”

“Her recall has improved greatly,” said Shaun. “She knows what she wants to say, and the words are starting to come faster.”

The Rostrons particularly liked the structure of UMAP, and that different therapists use different methods to help keep the recovery process moving.

“Mimi does one thing and Kaitlyn does another — and that’s good for me,” said Jessica.

Shaun said the goals the therapists set for Jessica were realistic and that when they met one, they would adjust it to keep her momentum going.

“It was also very tailored to her life,” he said. “They focused on how she’s going to live her life from here, and they focused on things that are important to Jessica, not just a structured program that outlines general benchmarks.”

As part of Jessica’s therapy, and as an experienced pre-school teacher for 2 year-olds, she was asked to help out with UCLL’s Core PACT program that offers early and intensive speech, language and communication intervention for children 18-36 months. Jessica participated in Core PACT twice a week for about an hour each day. She said it was one of her favorite aspects of the program.

“Playing with the kids, reading them books, helping them talk —it helped me gain confidence,” she said.

After much hard work and diligence, Jessica will initially return to her old classroom to aid the current teachers on a limited basis following her UMAP session. She is looking forward to returning home to her children, as well as her extensive network of family and friends, who helped make the Rostron’s trip to UMAP possible. She will also persist with speech therapy, continuing to work on the goals she established at UMAP at a program near her home. Shaun said the UMAP therapists have been in contact with Jessica’s home therapist and that they made it easy to keep the momentum going.

When asked if Jessica had advice for someone considering intensive speech therapy with the University of Michigan Aphasia Program, her answer came quickly: “Just try it.”