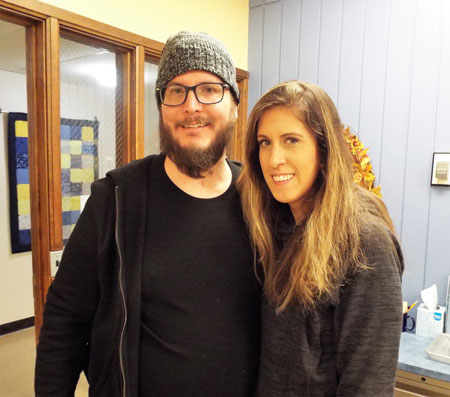 Josh and Lauren Mathews
Hometown: Nashville, TN
Six years ago Josh Mathews suffered a brain injury when he was attacked outside a bar. In an instant, everything changed for Josh and his wife, Lauren. He was left unable to speak, and his language recovery journey has involved many starts and stops with programs that didn’t end up being the right fit. Then, he found the University of Michigan Aphasia Program, UMAP.

In the beginning he couldn’t say anything, but now? “Now we’re working on putting sentences together,” said Lauren.

Josh tried different speech-language programs closer to their home in Nashville, but his speech difficulties were severe and the programs weren’t confident in their ability to help him.

“It felt like they gave up on him,” said Lauren.

Several programs discharged him or referred him elsewhere, but Josh and Lauren weren’t ready to stop trying. When they saw a brain injury specialist in Denver who recommended UMAP, they decided to give it a try.

“It was a complete 360,” said Lauren. “There were a gazillion things UMAP clinicians could do with him.” There were concrete things Josh could work on and he was excited to do the work, especially when he began to see improvement. The changes moved beyond just words — Josh was also louder and more confident, said Lauren. The Mathews decided to return for another session to keep building on Josh’s improvement. In his second session, Josh has been working on expanding his vocabulary and stringing more words together to form more complex phrases.

When Josh isn’t at UMAP, he attends speech, and physical therapy and practices his speech, on his own or with Lauren. Practice really is the key, she says.

“The more Josh practices, the better he is.”

Josh also attends a weekly aphasia program in Nashville, staffed by Speech-Language Pathology students. The all-day program gives him an opportunity to get speech therapy, and spend time with other people who have aphasia.

Lauren met people in the aphasia community, too, but she didn’t meet another wife in her age bracket until coming to UMAP, six years after Josh’s injury. “I was really happy to meet somebody like me,” she said. “It helps to know there are people like me going through the same thing, feeling the same thing.”

Aphasia can feel lonely, but meeting others in the community, especially in-person, can help remedy some of the isolation. Lauren said that talking to other families is the best resource when you have questions about aphasia, because they have probably been in the exact situation. They have ideas and advice that you may have never thought of.

The community is part of what makes UMAP special for the Mathews. “It’s hard to describe,” said Lauren, “but it’s like family here. The clinicians jump in with you and go through the journey with you.”

She feels like she’s really gotten to know the other people in the program, and Josh loves getting up and coming to UMAP every morning. Lauren and Josh rely on support from loved ones, because recovery is mentally, emotionally, and physically difficult. Lauren says it helps to learn to communicate with your support network, so they can help encourage you throughout the process.

Recovery is a long road, but Lauren and Josh have learned how to balance hope and pragmatism. “He may never talk more than this, and that’s okay,” said Lauren — but that doesn’t mean they’ll stop trying.