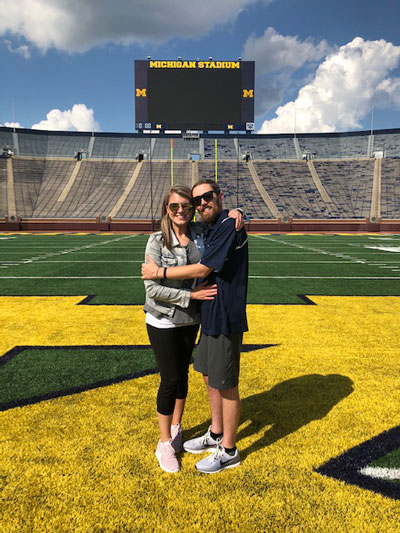 In January 2018, like many across the nation, my husband Ryan and I were recovering from the flu. Overall, though, life was good. I had started a new job, and we were just trucking along like a normal couple in our 30s. Little did I know that just weeks later our lives would change forever.

What we didn’t know is that Ryan has a rare condition called Eagle syndrome.

The doctors think he’s had this condition all his life. Eagle syndrome is when a person’s styloid bones (between the jaw and ear) are so long that they overlap the carotid arteries. I suppose the flu and the coughing was the straw that broke the camel’s back. It triggered a series of events.

Both of Ryan’s arteries were dissected, which caused a blood clot that went to his brain. The night of February 6 was a blur. By the grace of God, Ryan fell out of bed that night, startling me awake. I, being 33, didn’t know anything about Act FAST at the time. At first, I didn’t know what was happening. I only knew that I needed to call 9-1-1, as I could tell something was drastically wrong my sweet husband.

I remember that ambulance ride well. The smell of the night air and the uncertainty of what was to come. As we arrived at the hospital, I remember crying uncontrollably as EMTs, nurses, and doctors tried to explain what had happened to my love. The next week was an utter nightmare, peppered with close calls and miracles that we still can’t explain. Ryan was in the ICU for almost a month before he was released to another inpatient facility where he started physical, occupational, and speech therapy.

I call this time my zombie period. I’m sure all caregivers can relate to this as you switch into survival mode. They say in hard times, you really get to know yourself and what you’re made of. Boy is that the truth! I surprised myself in many ways during this time. It wasn’t easy, but I made it through with the help of our loved ones. I ended up having to forfeit my new job to find something more flexible, allowing me to take the lead managing our household and keeping up with Ryan’s demanding therapy schedule.

I believe everyone has different experiences as a caretaker, but for me, I found peace in family, friends and my faith. Keeping hope alive in times of turmoil can be the hardest thing you’ll ever do in your life, but I truly believe it’s the key to caregiving. Without hope, you lose the will to get out of bed in the morning. You lose the will to be positive around those who need you the most. It’s the glue that holds you together while you make your way through this new life.

Along with hope, humor has helped keep us sane throughout this journey. Ryan and I always laughed a lot as a couple prior to the stroke, but found comfort when we could laugh together after, even when we found out that Ryan suffered from aphasia and apraxia. We still keep humor present in our lives and we try not to take ourselves too seriously. We laugh and have fun with some of the speech exercises because, let’s be honest, they kind of set you up for it.

Fast forward almost eight months later and Ryan has made tremendous gains. While his physical appearance is mostly normal, with the exception of his right hand being a bit spastic, he still struggles greatly with his speech and comprehension. I had heard about UMAP from the facility where we were getting outpatient therapy and was quite impressed with their track record and history.

Our family motto has always been, “Go big or go home!” So, in order to take advantage of the best intensive therapy program in the U.S., we applied to UMAP. I’m so very thankful for the services we received as Ryan made HUGE cognitive and speech gains during his four weeks there.

The most unintended gain was the tremendous increase in Ryan’s confidence. Not only did Ryan gain a ton during our time in Michigan, but I did as well. I was surrounded by people who just “got it,” which was so comforting. I made new friends that truly helped me grow as an individual and in my caretaking role. I learned so much and found a new sense of belonging, which was an enormous gift. I was sad to leave our newfound family, but also happy to move forward with the knowledge and resources UMAP had given us.

Also, just as a side note, if you’re thinking about attending UMAP and you’re a bit adventurous, check out Anna’s Things To Do, a guide to a few places within a day’s drive for a fun break from therapy

Ryan and I hope our story can help those in similar situations stay motivated and inspire them to keep fighting when it comes to Aphasia and Apraxia. Be patient, keep hope and find humor in your everyday journey. You are stronger than you think and you WILL make it through this.