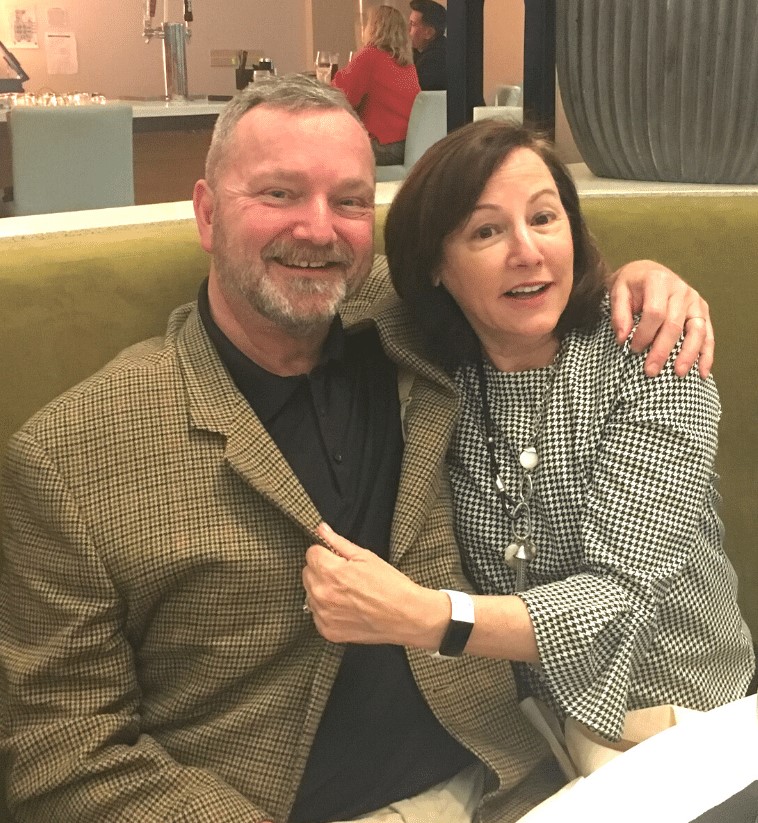 Tom and Janice are the kind of couple that when you mention one, you usually mention the other. Traveling, raising their kids, moving cross country, enjoying life — Tom and Janice, tackling it all as a team. When Tom experienced a series of health setbacks, including a stroke and aphasia, it was of course challenging. But they approached it together, unrelenting in their quest for recovery.

“This guy has been through a lot,” said Janice.

A Stroke, Bootcamp, and First Steps of Recovery

Going about their usual business, they noticed something was drastically wrong with Tom. Janice called 911 and they ended up racing to the hospital in an ambulance. At the hospital there were a lot of unknowns. However, one thing was clear: Tom had had a stroke caused by a blockage in his carotid artery. As soon as he was able, he started rehab at the hospital, undergoing physical, occupational, and speech therapy to begin the long road back.

After being discharged from the hospital, Tom attended a program at the California Pacific Medical Center (CPMC) that the Herlihys dubbed “bootcamp” because of its intensity.

“It was relentless,” said Janice, “but Tom made a lot of progress.” After six weeks loaded up with full days of varying therapy –– speech, occupational, and physical –– the Herlihys were ready to return to something familiar and closer to home.

They decided to start therapy at a facility in their hometown. This allowed them to stay in their home, although some modifications — both in their physical space and emotional expectations — were necessary.

They had a hospital bed brought in, and converted the main floor dining room into a bedroom, filling it with photos to remind them of their support network, the warm faces of their family and friends surrounding and encouraging them to keep going. Tom couldn’t walk on his own. They brought in around-the-clock care. Janice said getting used to having medical staff in the house was just one of many adjustments they had to make after Tom’s stroke, but they figured it out together, finding balance where they could.

Tom was home and working hard to continue gaining strength, mobility, and communication skills when he had another health complication. He wasn’t feeling well and returned to the hospital where he was diagnosed with the flu and then appendicitis.

“He had to recuperate in the hospital again and lost ground,” said Janice. “But he wasn’t giving up on recovery.”

Two years after Tom’s stroke, Janice heard about the U-M Aphasia Program (UMAP). It was mentioned in Diane Ackerman’s book about her husband’s aphasia, One Hundred Names for Love.

Janice was hesitant to apply at first. “I felt like he wouldn’t qualify for the program or they wouldn’t think he was a good candidate,” she admitted. She didn’t know if it had been too long since Tom had had his stroke, if hoping for improvement after prolonged aphasia was realistic, and she worried the program may be too physically challenging for him. Her friends gave her the encouragement she needed to apply for the program. A follow up phone call from a UMAP clinician allayed her fears and got her excited for the program.

When they arrived at UMAP, Janice’s lingering worries began to evaporate. “I knew he was safe and in good hands, I wasn’t scared anymore,” she said. “They were going to watch out for him.”

In large part, that was due to the UMAP team approach, where the clinicians take into account each client’s history, goals, and motivation. The focus is not only to help each person strengthen communication skills from whatever point they are in their recovery, but also to build confidence and real-life strategies for connecting with others.

“It was so individualized to Tom’s needs,” said Janice. “And the SLPs cheered him every step of the way.”

The Herlihys were expecting the rigorous therapy they received — it was one of the aspects of UMAP that had appealed to them. They were surprised by another feature of the program, however.

“I didn’t expect to get so much comfort from other families that know what it’s like, that know how drastically life has changed,” said Janice. In this place, across the country from their home, in a group of people with different backgrounds, from different places, with different stories and needs, Janice and Tom felt at home. The Herlihys decided to do a second session at UMAP, about one year after their first session. The second time around, Tom felt confident and excited for the program. He and Janice were surrounded by familiar faces again.

The Herlihys returned home after their second session and settled into a familiar routine. They kept in contact with UMAP through newsletters, cards and occasional check ins with clinicians. They learned UMAP was beginning a teletherapy practice for former clients of the program — and were immediately interested in being able to access the quality and style of UMAP care on a regular basis, all while staying in familiar surroundings.

Because it had been a few years since they had been to the program, UMAP Clinic Manager Jennifer Corey suggested they come back for a quick refresher before starting teletherapy. The refresher was also helpful for UMAP clinicians to gauge Tom’s progress and to learn more about his goals and motivations before diving into teletherapy. The Herlihys returned for a shortened form of the program at the end of 2019. And it was good to be back.

“All the therapists we knew from six years ago were there,” said Janice. “It was so cozy and welcoming.”

Building confidence in his language and communication skills helped Tom find independence in other ways. At UMAP, treatment is centered on the Life Participation Approach to Aphasia (LPAA), using therapy to emphasize creative and useful ways clients can participate in the world around them. UMAP clinicians also encourage people with aphasia to advocate for a recovery that works for them.

Tom told Janice what he wanted to do next: drive the car. She was supportive, but didn’t know if it would be possible. After working with a qualified driving coach and practicing, Tom was able to take and pass both the written and the road test. Having his license again “meant the world to him,” Janice said.

A Stroke Doesn’t Just Happen to One Person: The Care Partner Perspective

Throughout Tom’s medical scares and pursuit of recovery, Janice said she often felt invisible. People didn’t seem to understand that Tom’s stroke happened to her as well; it had happened to their whole family. That changed when she came to UMAP. She was heard, acknowledged, and consulted when it came to Tom’s aphasia therapy.

“I felt like an equal, like my voice mattered too,” she said. “I got to talk and ask questions. I got to sit in on every session. I got to be listened to.”

At UMAP, they were once again Tom and Janice — Janice and Tom. Two equal parts of the equation. Janice said they were seen as the team that they are. And being part of a team is the best way to approach therapy.

Are you interested in joining the UMAP “team” and pursuing your own aphasia success story? We offer sessions year-round and work with each client to make sure the program is a good fit. To learn more about our individualized program and what we might be able to do for you or your loved one, call (734) 764-8440 or email ucll@umich.edu to get the conversation started. You can also visit the UMAP website to learn more about dates and rates, program components, and more!