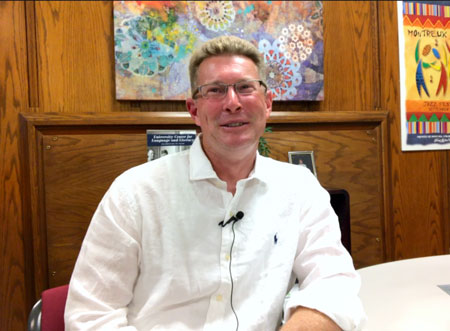 In the spirit of Let’s #TalkAboutAphasia, the National Aphasia Association‘s nationwide aphasia awareness campaign, we wanted to do just that — talk about aphasia — but we also wanted to ensure the voices of people with aphasia were part of our conversation. Which is why we launched a video series called In Their Words: Aphasia Experiences.

In part 4 of our series you will hear how Chris has survived not one but two strokes — and has worked hard to be able to tell his story. As he discusses in this video, he was married for only six months when he had a stroke 15 years ago. He talks about trying to pick out a Valentine’s Day card shortly after he left the hospital and how difficult that was. And while he’s 15 years post from his first stroke (the second one came four years after the first), he says it’s important to have patience, of course, but to never stop moving forward.

(Turn on closed captioning by clicking the CC button on the bottom menu and selecting English or scroll down for a transcript.)

– I’m Chris Bulthuis. I’m a survivor of two strokes. The first one is about 15 years ago and the other stroke was four years after. Both of my strokes were blood clots from my brain. Now, my first stroke, I was married for just six months and after I left for [from] the hospital, it was around Valentine’s Day. And it was very hard to go for the store and pick a card because I, my memory was not perfect. So, and it was, you’re gonna grab the card and you pick the sentiment, but as, I can process about one-third in the card. That was, it’s a struggle for the couple years. Process to remember the words for pictures, magazines, things for home I was looking for for home like scissors. And I know in my mind that picture, but I can’t remember the word. So for Aphasia, like I was saying with patients, also there’s really, there’s no cure. And my speech is pretty good, but it’s not perfect. To survive two strokes for 15 years is fantastic to actually speak and never, never quit. You always improve each day.

In the series, we ask our current and former clients and care partners to talk about their experiences with aphasia — the good, the bad, and the sometimes surprising.

The brief videos (3 minutes or less) are shot informally, and we asked our participants to communicate freely about aphasia from their perspective. Some opted to write and then read from their prepared statements. Others preferred more interview style-interactions for the videos.

Please help spread the word about aphasia — share these videos and help get the conversation started.

Click here for all of the videos:
In Their Words Playlist

Are You Dealing with Language Loss After a Stroke?

To learn more about UMAP and what we might be able to do for you or your loved one, call (734) 764-8440 or email ucll@umich.edu to get the conversation started.