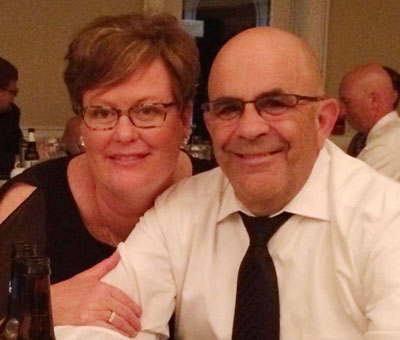 As a self-described “fun-loving couple,” Gene and Lisa Simon love to camp and golf, have fun and enjoy their time together. When Gene had two strokes in one year and subsequent aphasia, of course their lives changed. But they haven’t lost their positive attitudes or their close relationship. If anything, they said, aphasia has brought them closer. They have leaned on each other and their support network while navigating the challenges of aphasia and stroke recovery.

Two Strokes in One Year

A year ago, Gene had his first stroke and was able to bounce back quickly. The second stroke, six months ago, left him with a longer road to recovery. He was unable to speak or use the right side of his body and his vision was impaired.

“I was completely out of everything,” Gene said. He couldn’t read, write, or speak and had difficulty understanding what people were saying to him. “It’s been a bad problem, but it’s getting a little bit better every day.”

Life with aphasia is typically challenging for anyone, but the aphasia Gene has – Wernicke’s Aphasia – can be especially difficult. According to the National Aphasia Association, Wernicke’s Aphasia impairs the ability to understand the meaning of words and sentences and can severely diminish reading and writing capabilities. People with Wernicke’s Aphasia may speak in sentences without hesitation, but the words they speak don’t make sense. Wernicke’s Aphasia, like other types of aphasia, does not diminish the intelligence of the person who has it.

“When I try to talk, nothing comes out right,” says Gene.

After his stroke, Gene was going to a speech therapist in Battle Creek, but it was only twice a week. The therapist recommended UMAP to the Simons because she believed that Gene could benefit from intensive therapy.

“She knew how motivated he was,” said Lisa.

The UMAP Effect: ‘UMAP Opened His World Up’

At first, Gene worried he wouldn’t make any progress and was hesitant to attend UMAP. It’s a commitment – of time, energy, and money. Yet, he took a chance and after day one, those fears disappeared. Although days at UMAP are hard work, Gene said he loves the challenge. He has thrived in the intensive environment and has been continuously amazed by the progress he is able to make. Gene said he has also connected with the Speech-Language Pathologists at UCLL, whose positivity and encouragement remind him of the support he gets from Lisa. They’ve also helped him regain his sense of humor and his confidence.

“I feel like a whole person,” Gene said. “I knew that I was broken so long, and I kept thinking what am I gonna do?”

At UMAP, Gene has been able to talk to people who understand what life with aphasia is like. At times during his recovery, he has struggled with people not understanding how to talk to him. He said that a lot of people don’t know about aphasia so they don’t know how to react to it. At UMAP he was reminded that it’s okay to have aphasia.

While at UMAP, Gene has also participated in the Transcranial Direct Current Stimulation (tDCS) pilot research study in the hopes that it will contribute to his language recovery.

Gene may have been hesitant about the effectiveness of UMAP before attending, but he and Lisa have both seen such positive momentum that they are planning to return to UMAP for additional weeks of therapy after they complete the first session.

Although watching her husband go through this has been difficult, Lisa remains a constant, positive support. Being a caregiver isn’t easy, but Lisa said she refuses to let the tough stuff get her down.

“My advice is: don’t give up hope,” says Lisa, “In six months, we’ve improved so much.”

The Simons continue to be motivated by Gene’s progress. His reading and comprehension abilities are returning, and he is continuing to see his hard work pay off with strengthened communication skills. He now knows when he makes a mistake and is able to correct himself to find the intended word or phrase.

A Little Bit Better Each Day

Gene and Lisa know that, even if progress is slow, recovery is happening and every day gets a little bit better. They’ve learned how to rely on their support network and lean on each other when they need to. Gene said that sometimes the things he says are just his aphasia talking and it’s okay if they don’t make sense — and that it’s okay when he needs a little extra time to think of what he wants to communicate.

Lisa says to Gene something you can say to anyone in your life with aphasia: “You’re still the same person and I still love you!”