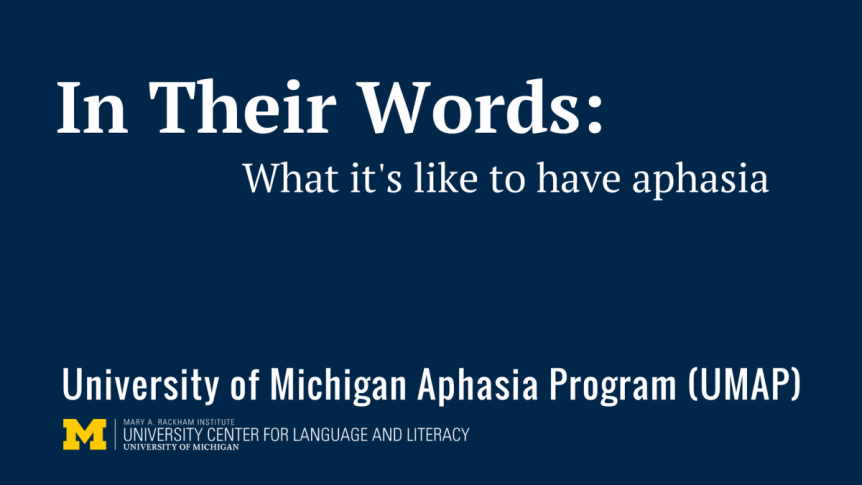 June is National Aphasia Awareness Month. In the spirit of Let’s #TalkAboutAphasia, the National Aphasia Association‘s nationwide aphasia awareness campaign, the University Center for Language and Literacy (UCLL) wanted to do just that — talk about aphasia — but also wanted to ensure the voices of people with aphasia were part of the conversation. UCLL, home of the U-M Aphasia Program (UMAP), launched a video series called In Their Words: Aphasia Experiences, to highlight the lived experiences of those affected by the communication disorder.

In the series, UCLL staff ask current and former UMAP clients and care partners to talk about their experiences with aphasia — the good, the bad, and the sometimes surprising. The brief videos (3 minutes or less) are shot informally, and participants are asked to communicate freely about aphasia from their perspective. Some opt to write and then read from their prepared statements. Others prefer more interview style-interactions for the videos. They offer a glimpse into the reality of what 2 million people in the U.S. with aphasia face when dealing with this communication disorder.

While an estimated 2 million people in the U.S. have aphasia, there are approximately 180,000 new cases each year. Aphasia, typically acquired after a stroke or head injury, can be incredibly isolating and affects not just the person with aphasia, but their entire circle — care partners, friends, family, colleagues and others.

In part 1 of the series, Al discusses what it was like following his stroke, some of the worries he experienced, what writing his first email with aphasia was like, and what he has done since to fight back with intensive therapy and homework.

“But the aphasia… The lack of obvious communication brings a deeper problem,” said Al, describing his experience. “Although my thoughts are still with me, who I am is now different. The part of me that I communicated to my friends and family and strangers, that ‘me’ of me is now somehow different.”

This project aims to help bring awareness to this disorder. Help us #TalkAboutAphasia and boost #AphasiaAwareness through sharing these videos and getting the conversation about aphasia started! A new video is posted each week and bonus content will be released throughout the month. If you’d like to receive the videos in your inbox each week, you can subscribe via this form.

Watch the videos here and check back each week for new stories: In Their Words: Aphasia Experiences

PLEASE NOTE: MARI is offering teletherapy and in-person appointments. Clients coming into the office will be asked their vaccination status and, as designated by U-M policy for clinical spaces, are still required to wear a mask and social distance. Contact us to find out more about wait times, insurance coverage, and service options.