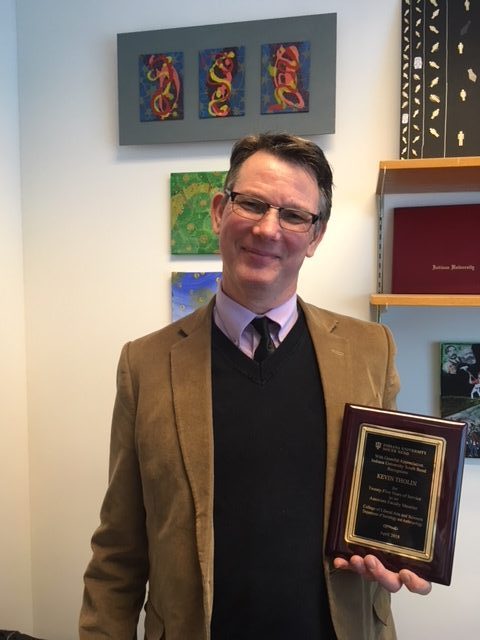 It has been decades since Kevin Tholin attended the University of Michigan Aphasia Program — but he credits his time spent at U-M with making those years more valuable to him.

“I’ve been working for 25 years or more, and without the Residential Aphasia Program, I wouldn’t have done anything,” he said. “I would still be collecting social security.”

Kevin was only 24, in the second year of his Ph.D. program at Notre Dame, when he woke up in a hospital bed unable to speak or move his right arm or leg. Kevin had suffered a stroke caused by a rare birth defect called arteriovenous malformation (AVM). From that first day in the hospital, he said, he was committed to recovering as much as he possibly could. First, he had to relearn how to walk and spent three months in the hospital undergoing a combination of occupational therapy, physical therapy, and speech therapy.

After Kevin was released from the hospital, he moved home and his social worker recommended the intensive aphasia program at the University of Michigan. At the time, the program was called RAP for Residential Aphasia Program, where clients would stay onsite. A few years after he left, the program changed to a non-residential setting. It then became the University of Michigan Aphasia Program, or UMAP, as it’s known today.

While the name changed, the intensity and individualized approach that Kevin experienced remain the same. He attended the program three times with support from the Illinois Department of Rehabilitation Services. He said that he appreciated the “camaraderie and the intensive nature of the therapy program.”

“I couldn’t have gotten that much therapy all at one time anywhere else,” he said.“I liked the Residential Aphasia Program so much because there were people there who were going through the same things I was going through.” 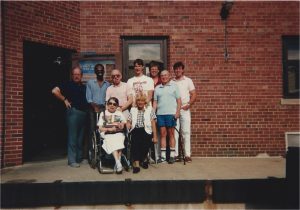 The speech-language pathologists he worked with not only helped him speak more smoothly and naturally, but they also helped by making the therapy relevant to him and his life. They found ways for the program to specifically address his needs, he said, tapping into his interests and individualizing his treatment plan. For example, when he wanted to go back to teaching — something he had done as a graduate student — his speech therapist Cheryl helped him prepare a presentation for students at a nearby school.

Kevin also enjoyed Ann Arbor. He attended both a U-M football game at the Big House and a Michigan basketball game. He took advantage of his close proximity to Detroit and attended a Tigers game with fellow clients.

“We had a great time,” said Kevin. “I remember that experience very fondly. It’s a part of who I am and my recovery process.”

A year after his stroke, he was able to return to his Ph.D. program at Notre Dame. His positive attitude helped him persist. Even after setbacks, like being turned down for a position teaching as a grad student or having to give presentations in class, he persevered.

“It was so difficult,” said Kevin. But he remained committed to recovering as much and as quickly as he could. He continued practicing speaking — and it paid off. When he applied the next year for the same graduate teaching position, he got it.

Eventually, Kevin felt the Ph.D. program was not where he wanted to be and he withdrew. He returned to where he felt at home: the head of the classroom. He went on to get a teaching certificate. Over the course of several decades, he has educated students in various settings, now teaching at both Indiana University and Riley High School.

“I never stopped wanting to be a teacher,” said Kevin. “It’s exciting. The interaction with the students, it keeps me young.”

Having a stroke and fighting through the challenges of recovery is never an easy journey, even with a positive attitude like Kevin’s. He said he still has days where speech is difficult or his physical limitations cause him trouble and he feels a little discouraged. But in those moments, he remembers some words of wisdom from his ex-wife.

“I was feeling a little sorry for myself that I hadn’t recovered as much as possible,” Kevin said. But his ex-wife told him, “You’ve completely recovered. You can do all the things you used to do. You’re just different.”

For example, Kevin’s car is modified so he can use his left foot on the accelerator so he can still drive. Sometimes tasks may take extra time or Kevin needs to find a modification, but he is not limited in what he can do. When he attended the aphasia program, the director at the time, Holly Craig, told him that the effects of his stroke would always be a part of his life — and they have been, but he has always found ways to adapt.

Today, as he looks back on his experience, Kevin noted: “I wouldn’t be where I am today without having suffered the stroke and my speech difficulties. I am very proud of what I’ve done and what I’ve accomplished — and I’m very thankful to the numerous people who have helped me out.”

Kevin’s advice for those recovering from aphasia? “Don’t be ashamed to just talk and talk and talk,” he advised. “It doesn’t matter if it comes out wrong.”

Get the Conversation Started

Are you interested in learning more about what UMAP could do for you or your loved one? Please contact us through the form at the bottom of this page bottom right) or call us at (734) 764-8440 and we will be happy to answer any of your questions! You can also explore our website to get a sense of the program. Learn about:

Do you have a story about the University of Michigan Aphasia Program (UMAP) that you’d like to share? Please do! We’d love to hear from you. You can email mari.comm@umich.edu with details or fill out the form on our Success Story landing page.