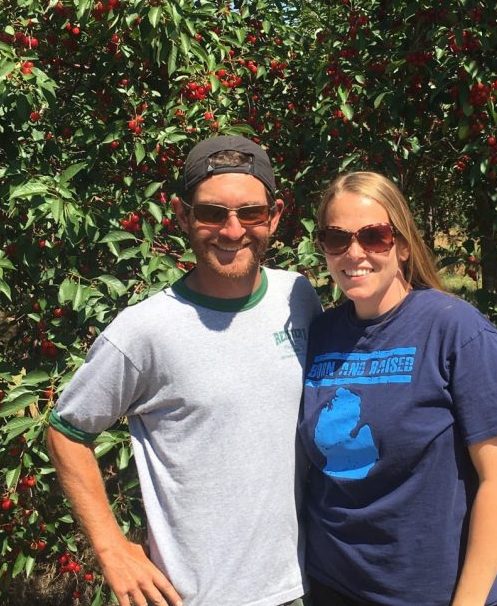 Theron and Amy Coleman make a great team — whether they are working on their family-owned cherry farm or parenting their three kids. Together, they have weathered Theron’s stroke and subsequent aphasia and their partnership is as strong as ever, even if it’s a little different now.

Two years ago Theron was enjoying an ordinary summer evening with his family when he was suddenly unable to speak and then collapsed. The Colemans traveled 40 minutes to the nearest emergency room where they were transferred to Grand Rapids. The transfer was to save his life.  In those moments, they were thinking about survival, not losing his speech.

“The doctors and nurses kept talking about how Theron had aphasia,” said Amy. “I had never heard of that before.”

Now the most difficult thing they face is aphasia.

Theron remained in the hospital after his stroke, gaining strength for a necessary heart operation before he was able to begin his recovery process. For two weeks after his stroke he was unable to speak.

“I could communicate pretty well with him without words,” said Amy, “but that meant he turned to me a lot when he was trying to communicate with others.”

After being discharged from the hospital, Theron went to an in-patient rehabilitation facility in Grand Rapids, where Amy said he “started on a great path to recovery.” When they arrived home, however, Theron had a difficult time finding a good fit with a Speech-Language Pathologist. At one point, they were driving 45 minutes for therapy, three times a week. Theron was working hard, but wasn’t making the progress he wanted and the schedule was wearing on the Colemans.

They began to research intensive options, which led them to UMAP. Attending the program may have seemed impossible at first with the regular demands of life, including three kids in school and busy work schedules, but Amy and Theron were able to make intensive therapy a priority — and ultimately knew it was a good fit despite the challenges in making it work. They were able to rely on their support network and family at home, allowing Amy to travel back and forth during Theron’s program, splitting her time between him and their children.

“After Theron’s first few days at UMAP, I knew it was the right decision,” said Amy. “I wish we would have gone sooner.”

When asked what he liked about UMAP, Theron said, “I like meeting new people too that have aphasia like me.”

UMAP was where Theron met another person with aphasia for the first time, over a year after his diagnosis. It helped him, said Amy, “to know that he was not alone.” In fact, their best advice for someone diagnosed with aphasia is to find other people who have aphasia.

They also wanted to emphasize that patience is necessary when speaking with someone who has aphasia: “I know what I want to say,” said Theron, “but sometimes I need time getting it out.”

Both Theron and Amy noted that aphasia is hard, but that you have to keep going.

“I am different now, but I won’t stop working on getting better,” said Theron. They keep their focus on the progress Theron has made and continue moving forward — together.