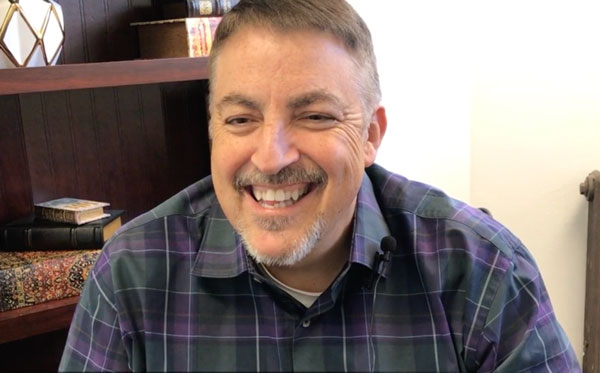 Cris Assif is a self-proclaimed “Buckeye for life,” but after a stroke paralyzed the entire right side of his body and left him unable to even swallow, he knew he needed the best treatment — treatment he found at the University of Michigan through the U-M Aphasia Program (UMAP).

Six months ago Cris was undergoing a heart valve replacement when a surge of complications arose. The minimally invasive procedure quickly became seven hours under sedation and intubation. When he woke up the next day, unable to speak or swallow, his team realized he had undergone a stroke at some time during the procedure. After Cris left his inpatient rehabilitation program, he was only able to receive three hours of speech therapy per week. He wanted more.

“I am naturally a talker,” said Cris when asked about the most difficult part of adjusting to life after stroke. “I can’t speak as clearly and quickly, and I can’t debate like I did before.”

Cris wanted to improve his speech as quickly as possible. He struggles with apraxia, which is a little different from aphasia, but both are commonly caused by stroke. Apraxia is considered a planning or programming motor problem. In order to speak, your brain tells the muscles in your mouth how to move to create sounds. Apraxia interferes with your brain’s ability to communicate with your muscles, and moving your mouth correctly to produce sound becomes difficult. In extreme cases, people with apraxia cannot speak at all. Therapy for apraxia often consists of repeated practice of correct mouth movements and sounds.

Eager to Get Back to Work

Although Cris was able to return to work only three months after his stroke, apraxia was affecting his ability to lead his team at work.

“If I wanted to get back to me in any meaningful way, I needed 70 hours or more of intense therapy,” said Cris and he began to research intensive aphasia programs.

“The thing that I liked about UMAP was the diversity of therapists and the tenure they had,” he said. “I sent an email on a Saturday and I talked with Dinah first thing Monday morning,” said Cris. “They wanted to understand my deficits so they could help me as much as possible.”

This responsiveness and individualized attention impressed Cris right away, and he attended UMAP as soon as he possibly could. After his first session at UMAP, Cris saw a dramatic increase in his ability to produce understandable speech. “I came to UMAP at about 50 percent understandable speech and now my speech is slow, but it is 80 percent error-free and I can speak clearly,” he said.

Cris receives four hours of speech therapy per week at home, but has returned to UMAP for “tune-ups” consisting of a few full days of therapy with UMAP’s specialized Speech-Language Pathologists. Cris’ commitment to his recovery means he is always looking for new types of treatment.

Cris also sought a neuropsychological evaluation from Carol Persad, Ph.D., the director of the University Center for Language and Literacy (UCLL), which houses UMAP. A neuropsychological evaluation consists of an extensive array of tests that can be used to provide an understanding of how the brain is functioning in relation to cognitive skills such as memory, attention and language. The results of the test gave Cris an understanding of how his stroke impacted his cognitive function — beyond his speaking abilities. Cris said the additional testing was very helpful because it gave him a complete picture of his cognitive functioning and an empirical measurement of his recovery.

“I have now a game plan to follow to get better cognitively as well as my return to public speaking,” he said.

He said he is thankful for the support of family or friends — but also recognizes that recovery is often in his own hands.

“You have to seek intense therapy for yourself,” he said. “You have to take your healthcare under your control because the system is not geared toward helping you.”

During his post-stroke journey, Cris has faced the stigma that often accompanies communication disorders. There is a common misunderstanding that difficulty speaking equates to diminished intellect.

“It is easy to retract from that,” said Cris, “but I have elected to continue to put myself out there. You have no choice. It will beat you if you let it.”

Watch Cris tell part of his story through our In Their Words: Aphasia Experiences video series.

Get the Conversation Started

Are you interested in learning more about what UMAP could do for you or your loved one? Please contact us through the form at the bottom of this page (bottom right) or call us at (734) 764-8440 and we will be happy to answer any of your questions! You can also explore our website to get a sense of the program. Learn about:

Do you have a story about the University of Michigan Aphasia Program (UMAP) that you’d like to share? Please do! We’d love to hear from you. You can email mari.comm@umich.edu with details or fill out the form on our Success Story page.