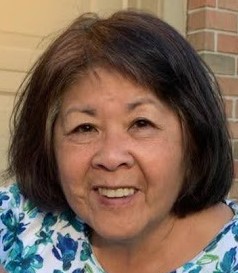 Born and raised in Detroit, Carol Viventi currently lives in East Lansing, Michigan with her family. Carol had a stroke three years ago, and has both apraxia and aphasia. We asked Carol, a U-M Aphasia Program client, to share her experiences with aphasia and UMAP.

Three years ago, Carol was on her way to the paint store when she suddenly collapsed. Carol’s younger daughter had come with her, and was waiting by the car when she witnessed the fall.

“I was not talking very well,” Carol said. “I wasn’t talking hardly at all, but whatever I was saying it was garbled.”

Suspecting she was having a stroke, Carol’s daughter then called the paramedics. They quickly went to a hospital nearby, where the doctors confirmed that Carol had suffered a stroke. In the following days, Carol still didn’t know what was going on or what was wrong. She even wanted to go back to work.

“I kept saying: I’m fine, I’m fine. Give me another day or two and I’ll be just fine,” Carol explained. “And as it turned out, I never did return to work.”

After three days, Carol was transferred to a larger rehabilitation center at Mary Free Bed.

Learning to Live with Aphasia

Carol’s fighting spirit, along with a strong support system from her family, helped her to seek treatment following the stroke.

Prior to her stroke, Carol didn’t know what aphasia was. Her daughters helped her explore therapy options and were able to do more research on the Internet. After searching online, Carol’s daughters discovered the U-M Aphasia Program (UMAP).

Her daughters successfully got her into the program, and Carol took the next steps to continue her treatment with UMAP.

“I think it was a really good program because it was so structured,” Carol said. “So it wasn’t just learning speech therapy, but also meeting other people who have aphasia and understanding that everyone is affected differently.”

Because she was able to access UMAP care on a regular everyday basis, Carol found that the program was a great fit for her. Since then, Carol has referred several people to the U-M Aphasia Program.

Follow her time at the program, Carol has stayed in touch and even participated in numerous UMAP Social Hours. These free, virtual social hours are held monthly and allow people to relate and meet with others in the aphasia community.

For the past year and a half, Carol has been undergoing teletherapy through online platforms like Zoom. Carol explains that it took her a while to get comfortable with the transition to online meetings.

“But once you’re on, it’s nice!” Carol said. “You can say whatever you want to say – as long as you get the words right.”

One helpful technique that she learned from UMAP was to create her own personal dictionaries. These dictionaries help her remember how to say certain words, like “appreciation” or “appointment”.

For Carol, giving up on a word that she doesn’t know is not an option.

Currently, Carol lives with her husband, who is in the later stages of Parkinson’s disease, as well as her daughter and her fiancé. They have caretakers that come into the house to provide additional support and help Jim, her husband. Carol says that she is lucky to have the support and has learned to appreciate it.

“I’m very independent, and I think you want to be independent,” Carol said, “But I think I’ve realized now, and it’s three years from my stroke.”

“It’s better and it gets better all the time,” she continued, “But it’s not ever going to be exactly the way it was.”

Despite the challenges, Carol enjoys going for walks, meeting with her friends, and can drive.

The Importance of Aphasia Awareness

About 1 million people in the U.S. currently have aphasia, and nearly 180,000 people acquire it each year, according to the National Aphasia Association. Despite these numbers, aphasia is often a misunderstood condition.

Carol says that there are not that many people who know what aphasia truly is.

“It’s very hard, in this world, for people to not understand what you’re saying,” Carol explained, “It’s like you’re speaking a different language.”

Carol has persevered throughout her journey and offers some valuable advice to those who are affected by aphasia.

“The thing I would say is to keep going and have hope,” she says. “I would encourage everyone to talk to their neighbor. Even if you can’t talk, start with a word or two – and keep going!”

About the U-M Aphasia Program and UCLL

The University Center for Language and Literacy (UCLL) is committed to helping people of all ages find meaningful ways to communicate. UCLL is part of the Mary A. Rackham Institute (MARI) at the University of Michigan. MARI provides high-quality, individualized mental health, neuropsychological testing, and language and literacy services to the community through its service centers, including UCLL, University Center for the Child and Family (UCCF), and University Psychological Clinic.