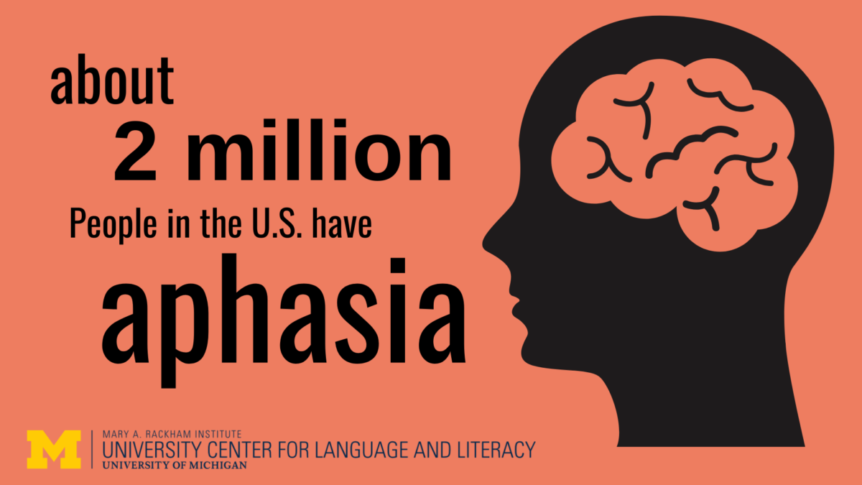 Imagine waking up from a stroke to realize you have survived, only to discover part of you is still missing: your voice. Aphasia is a communication disorder that can affect a person’s ability to speak, understand, write or read. It is most commonly acquired as a result of a stroke, but is also caused by illness and injury. It is very isolating for the person with aphasia as well as their family and friends.

Many people have not heard of aphasia, even though it affects more than 2 million people in the U.S. and Canada, with an estimated 150,000-200,000 new cases a year.
Aphasia has an awareness problem. It’s more common than cerebral palsy, multiple sclerosis, ALS, Parkinson’s disease, and muscular dystrophy — combined. And while most people have probably heard of those other conditions, they are unfamiliar with aphasia. It’s important to build awareness, because as we know, that is the first and most crucial step in finding public and political support.
The fact that it is a communication disorder (i.e., it can take away a person’s literal and figurative voice) and it is fairly “invisible” means it is less commonly known and understood among the general population. Yet, chances are that if you know someone who has had a stroke, they may have struggled with communication immediately — or still struggle with it. It can vary in type and severity. Some people recover fully, most make progress, some will never be able to communicate the same ways again.
Aphasia can improve with access to proper therapy and treatment, the most effective of which is intensive, comprehensive speech-language therapy. The University of Michigan Aphasia Program (UMAP) has offered intensive, individualized and innovative speech language therapy to people with aphasia for more than 83 years.

Holiday Hours: MARI offices will be closed for winter holidays, beginning 4 p.m. Friday, Dec. 23 and will return to regular office hours on Monday, Jan. 2, 2023. Our response times during the seasonal closures may be delayed. Thank you!